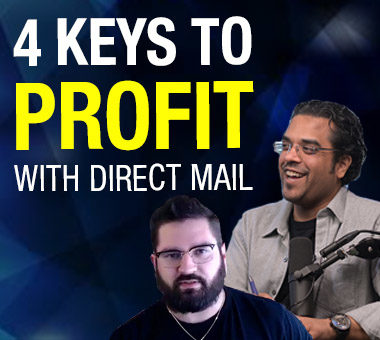 Ryan Allaire is the world’s foremost expert at using direct mail to gain leads. His L.E.S.S strategy takes advantage of a rich, but hardly-used traffic source that most marketers have thought to be long dead. Join us to discover how you can generate your first $10,000, $20,000 or even $50,000 using direct mail.

I mean who still reads the mail when you have Chatbots and email?

Well, that’s what I used to think, until my guest showed me I had it all wrong.

While other marketers have ignored direct mail, he’s used it for many years to generate millions of dollars.

Ryan Allaire is going to teach me How To Add An Extra $100,000 to My Business Using Direct Mail.

Now Lurn has a lot of lead flow, so achieving this number won’t be a problem.

But, what about the people that are just starting out? What could they do with direct mail?

Ryan became a millionaire by using his method called L.E.S.S:

A time-tested formula he’s used again and again to generate millions of dollars.

So what exactly is L.E.S.S?

Well, listen closely as Ryan explains how you can profit with direct mail.