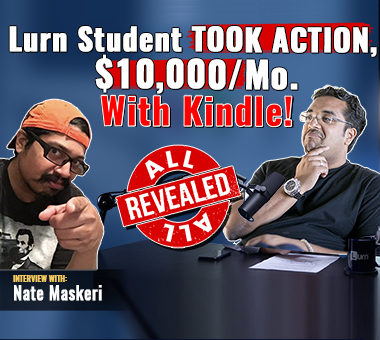 Today I wanted to share a story of one of our Lurn students.

Today I wanted to share a story of one of our Lurn students.

Actually, Nate and his father are avid listeners of the Fighting Entrepreneur, but his father thought the episode would be powerful for his son to learn. After Nate listend t the podcast, he then began to research and consume all of the free training videos Lurn provided.

Nate was a fast action taker, and purchased the course as soon as it was available in August, 2019. He released his first free book in November, collecting email leads and building a presence in Amazon.

All Nate did was follow Ty Cohen’s instructions to the “T,” and started having incredible success.

In this episode Nate will reveal exactly what he did within those 5 months, and what he will add for the future growth of his publishing business